The typical home cook may not have a sous-vide, smoke gun, nor all those chemo-gastro tricks and bits in their cupboard. But in my experience, refrigerator purgation is a fun enough sport of its own.

I have no doubt that by this age, any conscientious cook would be well aware of the amazing efficiency of North Americans in wasting food. And I’m equally certain that many of you secretly do a victory hand gesture when you come up with something perfectly delicious out of seemingly nothing.

Story of these banana scones.

1. Bananas: leftover and on the verge of becoming the breeding ground of fruit flies.

2. Cream cheese: leftover and mistaken for butter due to its dehydrated state of being.

4. Butter: the last stick – hey, that’s barely enough for anything.

Perhaps you can now begin to understand my excitement when I used all of them up and popped these golden babes out the oven!

So tell me, what’s the most outrageously delicious thing you’ve done to redeem ingredients that’ve passed the point of no return?

for the weak and the needy,

and he will rescue them.

He will redeem them

from oppression and violence,

for their lives are precious to him. 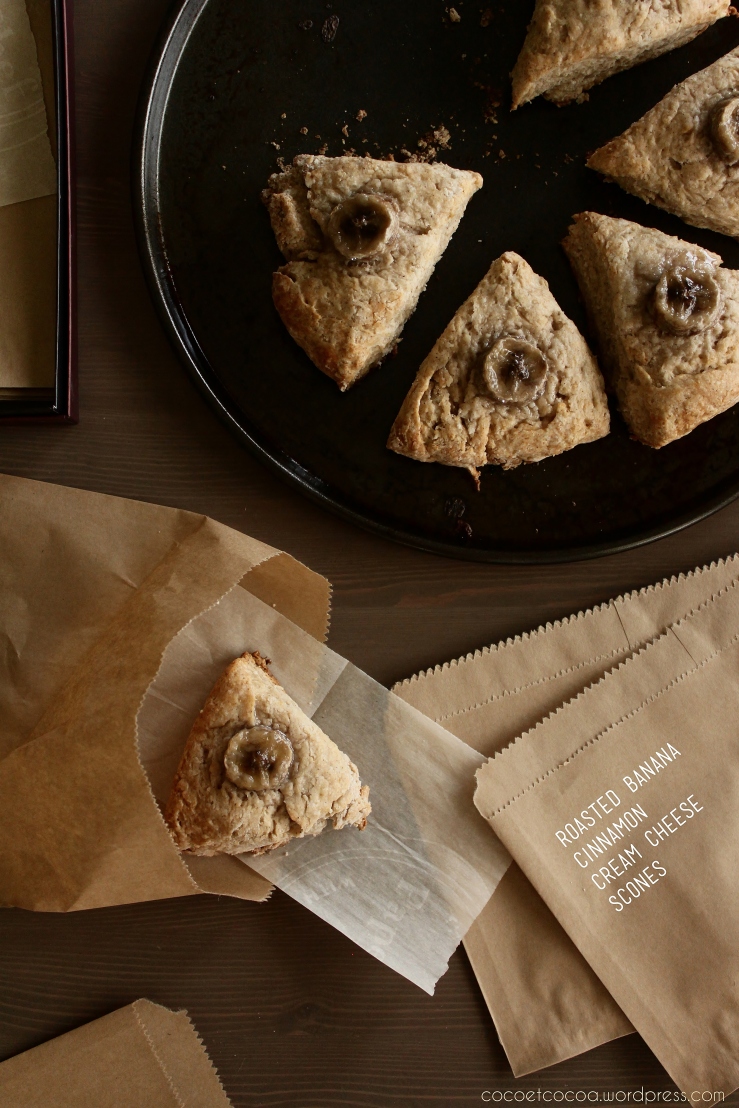 Ingredients for the Roasted Banana on top:

To make the roasted banana garnish, dip one side of each banana slice in the sugar to coat generously.

3 c AP flour, you can substitute up to half with whole wheat

To make the scones, preheat the oven to 365 degrees F, with the racks spaced evenly in the oven.

Put the flour, sugar, cinnamon, baking powder, baking soda, and salt in a food processor and blend until even. Pulse in the cold butter and cream cheese until a coarse mixture forms and there are still some small, visible bits of butter remaining. Transfer the mixture to a large mixing bowl and chill in the fridge until needed.

Take the flour mixture from the fridge and make a large hole in the middle. Pour in the banana mixture and stir gently with a fork just to combine – it should hardly even come together. Divide the mixture in half and knead each portion at most twice to bring it together. Gather each into a mound and press it into an inch-thick disc. Cut each disc into 6 wedges and transfer to 2 baking sheets, leaving 1-inch space in between.

Brush with a little extra cream and garnish with the sugar coated banana slices. Bake for 18-22 minutes, or until pale golden and risen.

Serve warm or at room temperature…

…with a cup of black, obviously.

5 thoughts on “A Scrappy Panegyric”