As a child, I did not enjoy apples. Not even honey-sweet fuji’s, so don’t even let me see that malicious green of granny smiths. Nor did I, as a child, see the light and succumb to the revelation of coconut. And “give me wheat”, I said “give me white flour” I said. What are oats?

I reasoned that apples were to crisp and firm for my budding teeth, and green ones which must have been under-ripe would have broken my jaw. Coconut, I claimed, had too milky a taste and at the same time was sweet with a touch of acid. What? Finally, oats were goopy and slimy, mind you, I still don’t like pudding.

As a friend pointed out, “if I can’t accept you at your worst, then maybe you should change.”

what if apples were not tied to the word “crunch”, and “firm”? What if they melted on the tip of your tongue like gold, molten caramel? What if coconut did not taste so pale, but smelled of toasted pecans and browned butter? And what if oats were, instead of stodgy and heavy, crisp and flaky like the outermost shell of a Parisian croissant?

But no, I’m not starting a revolution, and who knows, maybe apples were meant to be fondues, maybe coconut was meant to be caramelized, and oats were meant to be toasted. I’m defining my own little bit of happiness, that’s all. So if you really think your grandmother makes the best apple crisp, go ahead. By the way, I never said this was an apple crisp.

It has all been done before.

Nothing under the sun is truly new. 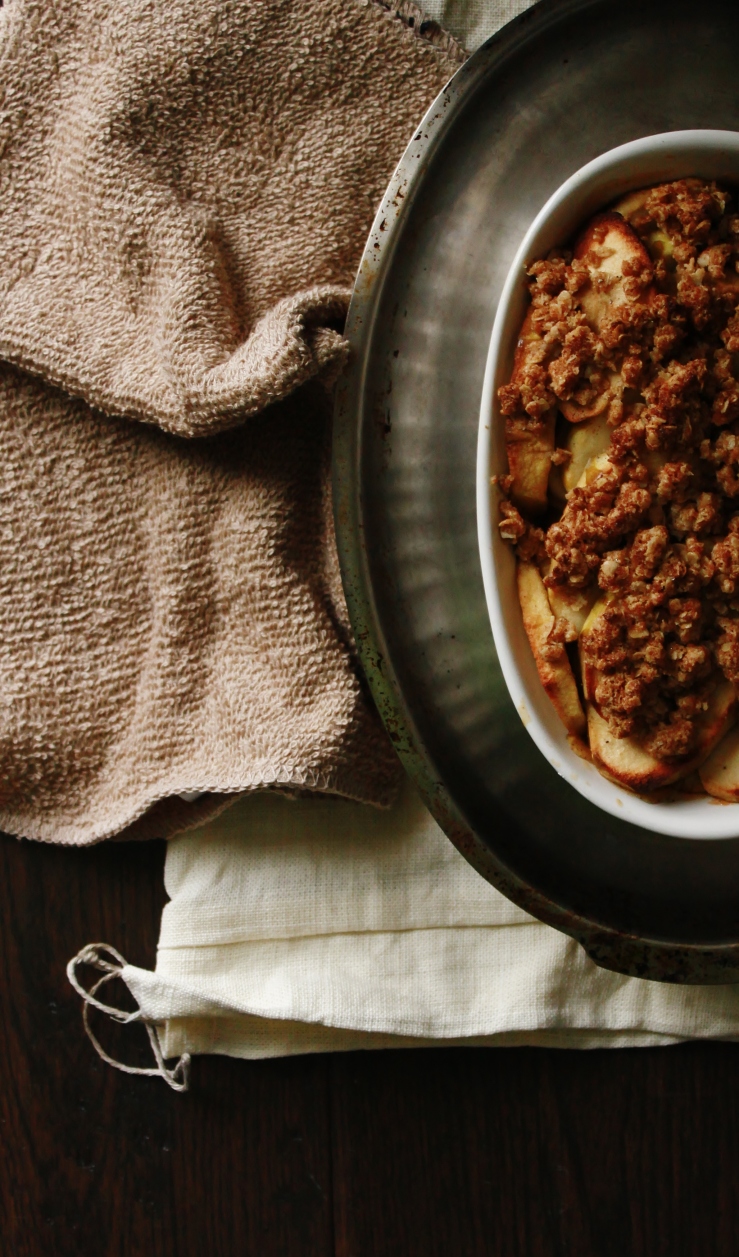 1~1 1/2 tbsp packed brown sugar (I like the tartness to really shine through, but it’s up to you how sweet you want yours)

1/2 tsp sea salt (I know this seems a bit much, but trust me it makes the crumble so much more addictive)

To make the pommes fondues, first start by softening the apples; toss the apple slices evenly in a large bowl with the 1 tbsp brown sugar, the cardamom, and the 1/4 tsp salt. Let the mixture sit for at least 10 minutes, up to 2 hours, covered, until liquid accumulates at the bottom of the bowl – this is very important because that’s what will give the end product that smooth, sticky caramel texture.

Meanwhile, preheat the oven to 365 degrees F, with the rack placed in the middle of the oven.

Add the potato starch to the softened apples and stir gently to combine evenly and rid of any lumps. Don’t use flour, corn starch, or rice flour; I’ve experimented with those and potato starch is definitely the winner with the smoothest, most luscious mouth feel and best glazing effect.

In a separate bowl, stir together the remaining ingredients for the oat crisp. Then dump the apple mixture into a small baking dish, I used a ceramic oval, but really as long as it has some depth and can be directly spooned out of it’s fine. Shake the dish around a bit horizontally so the apple slices fall into place. Pour all of the juices over the apples, then top with the oat mixture.

Bake for 40~50 minutes, or until the top is crisp golden and the apples are veritably melted.

Enjoy! (Add a dollop of vanilla bean ice cream or creme fraiche, cut yourself some slack.)

3 thoughts on “Two Steamy Hot Grannies for One”